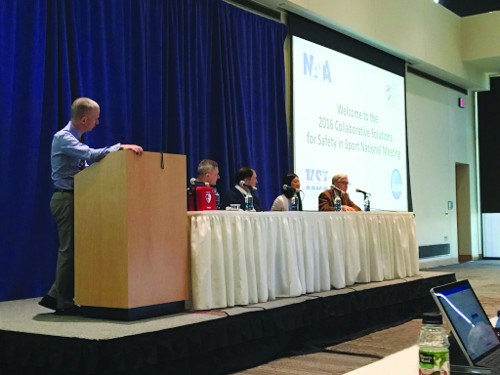 When it comes to promoting the health and safety of student-athletes, Dr. Brian Hainline is optimistic that great strides can continue to be made across all levels of sports medicine.
“Currently, there is a great spirit of collaboration among organizations,” said Hainline, who is the NCAA Chief Medical Officer. “The way we’re coming together now is truly magical.”

That spirit of collaboration was on full display at the 2016 Collaborative Solutions for Safety in Sport (CSSS) National Meeting last month in Indianapolis. The two-day meeting, organized by the National Athletic Trainers Association (NATA) and the American Medical Society for Sports Medicine (AMSSM) and hosted by the NCAA, brought together representatives from every NFHS member state association to discuss best practices in the risk minimization and medical care of student-athletes.

One goal of the meeting was to spur action throughout states on several initiatives, including sudden cardiac arrest, emergency action plans, performance-enhancing drugs and mental health.
The Korey Stringer Institute’s Dr. Douglas Casa helped host the conference and spoke at an opening press conference about the success from the effective implementation of a risk minimization policy, specifically, the NCAA’s heat acclimatization policy. Casa said that prior to 2003, on average, two NCAA student-athletes died each year from heat illness. In 2003, the NCAA mandated heat guidelines, which include an acclimatization period and practice limits. Since that time, the NCAA has experienced one heat-related death.

At the high school level, Denise Alosa, an athletic trainer at the University of Vermont, used last year’s CSSS Meeting to help the Vermont Principals’ Association enact heat and cold policies, as well as sudden cardiac arrest education, to all schools in the state.

“As a result of the 2015 CSSS meeting, we rolled out a heat plan last summer and had no instances of heat illness,” Alosa said.

Vermont’s example is exactly how the NFHS hopes to address various health and risk minimization issues, according to Dr. Bill Heinz, chair of the NFHS Sports Medicine Advisory Committee. Heinz said being a federation prohibits the NFHS from mandating policies like the NCAA.

“[For example], we would love to have a full-time athletic trainer in all high schools,” Heinz said. “However, we walk that fine line in not making policies that are onerous on state associations.” 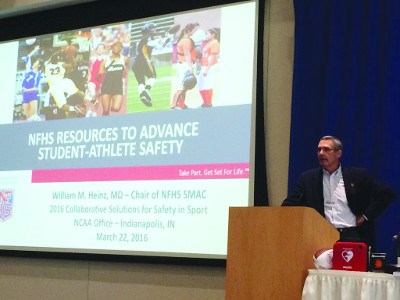 Heinz said the NFHS instead provides guidelines and position statements so state associations can determine the best solutions for their respective state.

Another major topic of discussion on the first day involved athletic training services in secondary schools. Robert Huggins, of the Korey Stringer Institute, presented the ATLAS project, which maps athletic trainer services across the country. ATLAS, which stands for Athletic Training Location and Services, has surveyed more than 3,000 athletic trainers nationwide and allows users to view what schools are covered by athletic training services, how they are hired and what services they provide. The ATLAS Project is available on the Korey Stringer Institute website, ksi.uconn.edu.

Dr. Hainline, who was one of several presenters from the sports medicine field, urged states to consider the mental health of student-athletes as important and integral as their physical health.

“Suicide is the third-leading cause of death in student-athletes,” Hainline said. “Mental health is not apart from, but rather a part of athlete health…and should not be neglected.”

Dr. Cindy Chang, of the University of California, San Francisco and the chair of the California Interscholastic Federation Sports Medicine Advisory Committee, spoke about the dangers of eating disorders and the importance of energy balance among busy student-athletes. She also shared how a drive for perfection can be beneficial in athletics, but detrimental to young people susceptible to eating disorders.

Fairfax County (Virginia) schools have been very active in educating their students and faculty on the importance of mental health awareness. John Reynolds, an athletic trainer from Fairfax County, presented on how fostering resiliency can help students’ mental wellness.

Education-based athletics was one of six “assets” Reynolds identified that students could use to avoid risky behavior and mental health issues. The others included participating in community service, having teachers who recognize good work, personal integrity, a community of adults to ask for help and involved parents to talk to. Reynolds said the more assets available to a student, the less likely he or she would choose risky behavior or become depressed.

The final panelist on mental health was Dr. Francis O’Connor, of the Uniformed Services University, who spoke about the dangers of performance-enhancing drugs and supplements. O’Connor has been successful in removing dangerous supplements from military bases, here and abroad, and warned that there is still very little known about the effects many performance-enhancers have on the body. Similar to Dr. Chang, O’Connor mentioned that the determination of many student-athletes to gain the slightest perceived edge is enough for them to try a supplement, and a significant hurdle to overcome in preventing their abuse.

“Do they work? Yes, they work. We use them strategically [in the military],” said O’Connor.

But, O’Connor emphasized education about the possible dangers and side effects of supplements, noting his personal belief that they can be linked to heart failure.

Another keynote speech came from Martha Lopez-Anderson from Parent Health Watch. Lopez-Anderson lost her 10-year-old son to sudden cardiac arrest and shared her desire to make AEDs more available to all schools, not just high schools. It’s a cause that Dr. Chang champions.

“AEDs should be ubiquitous, like fire extinguishers,” Chang said. “Sudden cardiac arrest is unpredictable but survivable.”

The NFHS was a sponsor of the meeting and Bob Colgate, liaison to the NFHS Sports Medicine Advisory Committee, was pleased to see the member state associations convene to discuss these important topics.

“Having all of our member state associations represented and in one room listening to sports medicine experts share their thoughts and best practices can hopefully help them develop their own policies to serve student-athletes better.”

Chris Boone is the assistant director of publications and communications at the NFHS.