Friday nights in the fall are part of the landscape that makes interscholastic sports special, and the memories of what transpires on that 100 yards of turf and in the bleachers that surround it last a lifetime. Most recollections arise from one’s own doing or the team’s success, but on October 24, 2014, at Marysville Pilchuck High School in Washington, it was the actions of the rival Oak Harbor High School football team that left a lasting impression.

It started as a normal Friday at Marysville Pilchuck as the football players strolled the hallways dressed in their Tomahawk jerseys with a buzz around the school. The game that night was a pivotal matchup with the Class 3A WESCO North Conference top seed on the line against Oak Harbor.

That excitement quickly turned to sorrow and dismay as tragedy struck when a student at the Seattle area school opened fire in the cafeteria killing four classmates. The shooter became the fifth fatality when he turned the gun on himself.

“As a high school football coach you get too wrapped up in wins and losses, X’s and O’s,” Marysville Pilchuck coach Brandon Carson said. “What we are doing in high school sports is way beyond that. It really opened my eyes that this is just a game and there are more important things in life than a game.” 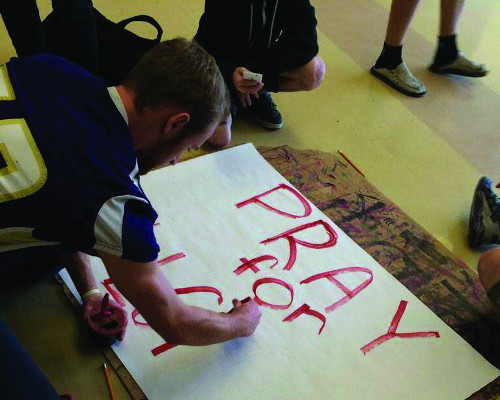 As the undoubtedly chaotic scene unfolded, the push for a conference football title seemed small compared to the need to provide support for the grieving community.

Carson said not long after the shooting news broke, he received a text from Oak Harbor coach Jay Turner with a message that allowed him to focus on the more pressing needs.

He said the text read, “We’re (Oak Harbor) willing to take the No. 2 seed, you have bigger things to worry about.”

Turner, who graduated from Marysville Pilchuck in 1990, said when the news broke, football took a backseat as he tried to process what had happened. Only after that did football enter his mind, and his decision to forfeit was an easy one and was fully supported by his staff and players.

“There was no way that those guys should be trying to figure out how to play a football game. We wanted to support these guys through this tough time. Why worry about a football game when there needs to be healing.”

Later in the evening, Carson gathered his players at the district office for a short team meeting. After his five-minute talk to the team, the group of players comforted each other for nearly two hours.

During that time, Carson got word that Oak Harbor’s support went beyond forfeiting a football game.

While the Tomahawks came together as a team, student-athletes from Oak Harbor’s football team followed their previous football gesture with one of solidarity when several players filed into The Grove Church in Marysville for a memorial vigil.

“Of all the teams in our league, Oak Harbor is the farthest away,” Carson said. “They came all the way up here and supported us like that. That really helped our kids start the healing process.”
Once the vigil concluded, the group of Wildcats migrated to the Marysville Pilchuck office to provide additional support and companionship. In all, the Oak Harbor players spent more than two hours traveling.

“They came into our team meeting and it was a pretty moving situation,” Carson said. “They came in saying that they cared about us and were thinking about us and that we were in this together.”

Carson said the surprise visit from Oak Harbor was not only special for him, but more so for his group of players. He added that the fan base of the Oak Harbor Wildcats grew that night. The above and beyond acts of sportsmanship were not missed by the student-athletes, and Carson knows how special the young people he is surrounded by every day are.

With Twitter feeds filled with condolences and supportive messages, Carson, like many others, felt a thank you was needed to express what Oak Harbor’s actions meant to him and the team. During a coaches meeting, the idea of taking pizza to a Wildcats’ practice the following week and presenting them with the conference trophy was discussed.

“We were just sitting around as a staff talking and we knew we had to do something,” Carson said. “We just took it and ran with it. It was the least we could do and was a way for us to say ‘thank you’ in a different way.”

The execution of surprising Oak Harbor began with Carson sending cryptic text messages to Turner hoping to keep his plan under wraps, but eventually he divulged his intentions.

As Oak Harbor’s midweek practice reached its normal ending time, Turner had the players continue running plays, which confused his coaches and players. Then 15 minutes later, the Marysville Pilchuck crew arrived and, at that point, the extra plays were worth the time. 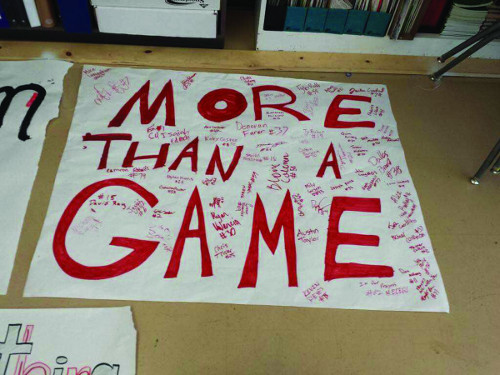 “There was a lot of hugs and a lot of handshakes,” Turner said. “A lot of these kids don’t know each other at all. They were around each other for about five minutes and they were on the field throwing the football, eating pizza and talking like they were lifetime buddies. It was an unbelievable experience in a positive way.”

As the players began the healing process, the decision to get back on the field was a welcomed one by many. Marysville Pilchuck returned to the field the next week and played five more games into the state playoffs, making it to the semistate round and finishing the season 11-2.

“I know our first game back was a crazy scene with lots of media and the stands were packed,” Carson said. “It gave our community something to look forward to. At the time we were playing well and it gave people something to smile and clap about. That was a healthy thing going forward with the healing process.”

While the events of that fall Friday morning will not soon be forgotten, the actions of a rival team will be etched in the memories for a lifetime.

“This is what high school athletics is all about,” Carson said. “This is sports in its purest sense.”

Jason Haddix is coordinator of sports at the NFHS after serving internships in the Publications/Communications Department. He is a 2013 graduate of Indiana University-Purdue University Indianapolis where he earned a bachelor’s degree in medical imaging and a certificate in journalism.