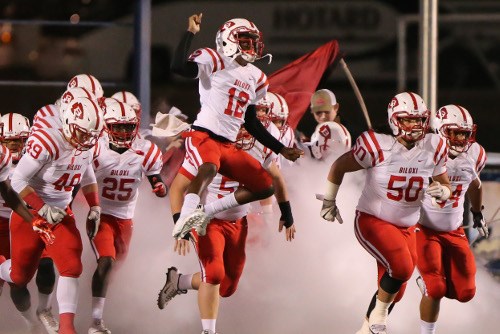 In an effort to re-emphasize that Friday nights in the fall should be reserved for high school football, the National Federation of State High School Associations (NFHS) has adopted a resolution that urges schools and teams at the college and professional levels to honor that longstanding tradition and schedule games on other days.

The NFHS membership, composed of state high school associations in the 50 states plus the District of Columbia, has adopted the following resolution:

“Be it RESOLVED that every Friday night during the fall in America is ‘High School Football Night.’

“Be it FURTHER RESOLVED that college and professional football teams should refrain from scheduling contests on Friday nights. Such restraint would be an investment in their own future success. It would also demonstrate that high school football has value well beyond the field of play. Schools, communities and scholastic teams for girls and boys all benefit when football is strong.

“THEREFORE, the National Federation of State High School Associations urges all parties to observe the central premise of this resolution.”

“The value of tradition cannot be overstated,” said Bob Gardner, NFHS executive director. “Friday nights offer communities a traditional time and place to congregate and support their students. If a major college football game was scheduled in the area on a Friday night, it could affect attendance at the high school game or cause the game to be moved to another day. In addition, many of the Friday night college games are televised, which could result in lower attendance at high school contests nationwide.

“We believe retaining Friday nights for high school contests is a plus for colleges as well as they reap the benefits of healthy programs at the high school level.”

She's Got Something to Say Podcast - Rhonda Blanford-Green