In leading the North Attleborough High School track and field team to its second consecutive Massachusetts Interscholastic Athletic Association (MIAA) Division II state championship this past spring, Derek Herber demonstrated his talents as a high school track coach. However, his actions following North Attleborough’s victory indicated the qualities of the person behind the coach.

Following a recount of the scorecard from his team’s one-point victory over Lawrence (Massachusetts) Central Catholic High School, Herber and the rest of his staff made a decision that proved that the North Attleborough track program is focused on more important issues than simply winning events.

Herber was analyzing his team’s scorecard the day after it had brought home another Division II trophy, and he made a startling discovery. Something just didn’t seem to add up. He found what appeared to be a critical scoring error by MIAA officials that had one of his runners finishing second in a race in which he actually finished seventh. After comparing his personal scorecard with the official results several times over – and each time finding his team short of the points needed to finish ahead of Central Catholic – Herber shared his findings with his assistant coaches.

“It was a group effort – all the (coaches) came together and confirmed the error,” Herber said. Following that discovery, there was a collective decision by the coaching staff to call the MIAA and report the error, followed by mailing the championship trophy to Central Catholic along with a brief letter apologizing for the mistake.

When asked if the decision to report the error and rescind the title was difficult, Herber replied: “It was a no-brainer. We knew that it was the right thing to do.” 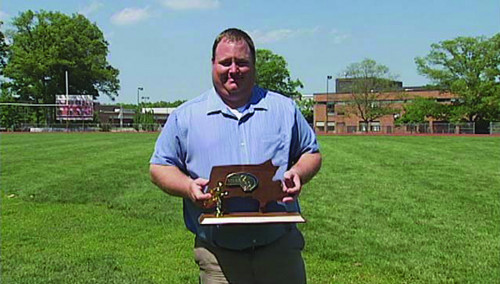 With the trophy on its way to the rightful victors and the MIAA informed of the situation, the next course of action was to break the news to members of the track team. In 17 years of coaching high school track – all at North Attleborough – Herber had never been forced to deal with this type of situation.

“I have never seen anything like it,” Herber said. “Occasionally (a scoring error) will occur, but never have I seen it alter the winner of a meet.”

Despite not having a precedent to follow, Herber and his staff had little hesitation about how to break the news to their athletes.

The team captains were the first ones to be informed of the scoring mistake, followed by members of the senior class. The coaches left it in the hands of the captains and seniors to share the information with the rest of the team. What had to be a difficult situation for a group of teenagers who had just been stripped of a title they thought they won was handled extremely well, according to Herber.

“They understood the situation and knew that the right decision was ultimately made […] there has been a lot of positive feedback for the act of sportsmanship (they) displayed as a team.”

Herber felt a responsibility to set an example through this situation, since many of his team’s members are also his students in class. In addition to his duties as head track coach, he is also an assistant varsity football coach and history teacher at North Attleborough.

When asked about the benefits of coaching multiple sports and simultaneously teaching at the same high school, Herber said: “It is enjoyable to see the kids I coach in a different light. Watching them excel (on the track and football field) as well as in the classroom allows me to see more of who they really are.”

Herber acknowledged that knowing his team members on a personal level made it difficult to break the news, but he said it was an opportunity to teach his kids valuable lessons of honesty, integrity and sportsmanship. Undoubtedly, these individuals learned a great deal more about the person behind their coach than they would have otherwise.

Accepting second place and returning the trophy to the rightful victors speaks volumes about Derek Herber and the character of the entire North Attleborough track coaching staff.

Matt Costakis was a 2014 summer intern in the NFHS Publications/Communications Department. He is a junior at DePauw (Indiana) University studying communications and English writing.