In Their Own Words: Rob Manfred 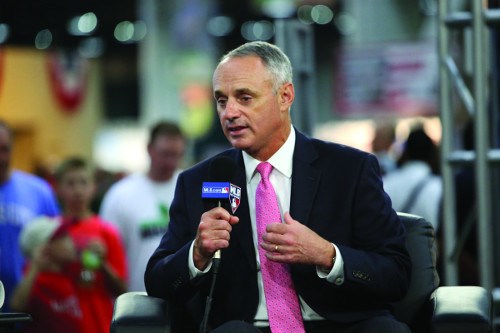 On August 14, 2014, Robert D. Manfred Jr., 56, was elected by the Major League Baseball team owners to succeed Bud Selig as the Commissioner of MLB. Manfred is a native of Rome, New York, where he attended high school at the Rome Free Academy and he went on to earn a B.S. from Cornell University and a J.D. from Harvard Law School. He became a partner at the law firm of Morgan, Lewis & Bockius where he served as outside counsel to MLB during the 1994 strike. After joining MLB on a full-time basis in 1998, he served for 15 years as Executive Vice-President of Economics and League Affairs, during which time he represented the league in Collective Bargaining Agreement negotiations with the MLBPA in 2002, 2006 and 2011, including the league’s first drug-testing agreement with the player’s union which was incorporated into the 2002 CBA, the first labor pact to be settled between the two parties without a work stoppage in more than 30 years. In 2013, after leading Major League Baseball’s investigation into the Biogenesis scandal, Manfred was promoted to the position of MLB Chief Operating Officer, in which role he oversaw all issues of labor relations, baseball development, business operations and league finance. On January 25, 2015, he took office as the 10th Commissioner in the history of Major League Baseball and in his nine months in the job has initiated a variety of innovative strategies related to youth outreach, restructuring MLB’s business operations, increasing the pace of play, improving the league’s relations with players and the MLBPA, strengthening the connection of MLB to its fans through the use of technology and social media, and extending the philanthropic and charitable activities of the league.

Q: In what sports and other activity programs did you participate during high school?

Manfred: In high school, I was the captain of the tennis team. I actually continued playing my first two years in college as well. And then in the winter time, I played a fair amount of basketball. I did not play on the high school team, but I played on a rec team that did a bunch of traveling, and I continued to do that all the way through high school.

Q: What impact did your participation in high school sports have on your personal development and your professional life?

Manfred: I played a whole bunch of sports when I was younger and then kind of gravitated to and focused on an individual sport, but I think that the great thing about my high school experience was we played tennis as a team. Being part of a team teaches you a set of skills that are not only important in athletics, but they really are important to you as you get into the world and learn to work with people to achieve common goals.

Manfred: I’m a huge believer in younger children participating in multiple sports. It is a huge benefit. Baseball teaches people certain values that I think are really important in addition to teamwork. I think that baseball in particular is a sport that teaches you to overcome adversity – you know even a good baseball player probably does not get a hit two out of three times that he goes to the plate. In my particular case, as a baseball player, I had lots of adversity to overcome!

Q: Youth baseball participation numbers have dropped significantly over the past five years. What role could you anticipate MLB playing in attempting to reverse that trend?

Manfred: We have been really focused on the youth space in my first few months as commissioner. Youth participation is a very, very competitive environment. I think it’s important for MLB to work with some great partners in the youth space, Little League being foremost among them, but others as well to make sure that baseball is as competitive as possible in that space. I think safety is a huge issue for parents and kids participating in youth sports. That’s why we’ve worked with USA Baseball to deploy the Pitch Smart program to make sure that kids who are pitching in youth leagues are used in a way that’s safe for them, that helps them avoid what can be really serious injuries. It’s that kind of interaction with existing partners in the space that I think is important for baseball to take the lead on.

Q: What specific goals do you have for the Play Ball Developmental Program (MLB’s joint venture with USA Baseball)?

Manfred: We have a great set of partners in USA Baseball and the U.S. Conference of Mayors for this program. The goal of Play Ball is to provide an umbrella by which we encourage young people to play the game. When I use the phrase “play the game,” I mean it in the broadest possible sense. If you look at the Play Ball website, it has great information if you want to be involved in a youth league. It has great information as to how you find that formal, wear the uniform, have the umpire, kind of baseball to play. But equally important, and this is where our partnership with the U.S. Conference of Mayors has been so important, we want Play Ball to kind of reignite the informal types of games that I thought of as baseball when I was a kid – Home Run Derby, whiffle ball, catch, hot box, all those games. I was at a great event just this week in Baltimore. The mayor of Baltimore was there with us. We had a bunch of inner city kids in a really under-served area playing whiffle ball, running drills, learning about baseball, and it’s those informal games that we want to encourage as well as formal youth play.

(Editor’s Note: Information regarding the Play Ball Development Program may be found at http://web.usabaseball.com/playball/)

Q: Is MLB still actively involved with the Reviving Baseball in the Inner City program (RBI) and the Urban Youth Academy program (UYA)?

Manfred: Yes. We see those programs as a really important part of our overall youth programs. Those two programs plus the Baseball Tomorrow Fund are focused on providing play opportunities in under-served areas. The RBI program is our broadest grass-roots program. We just want to get as many kids as possible playing. The Urban Youth Academy is focused on the more serious players. It gives them an opportunity to continue to develop their skills, and as you probably know, we’ve had a number of kids, young men, involved in those urban youth academies that have been drafted by MLB teams. The Baseball Tomorrow Fund is a joint initiative with the MLBPA, and the focus there is facilities. We try to build fields, so that kids in areas where fields are not available have an opportunity to play the game. I would be remiss if I didn’t say both of those programs also have a softball component to them. One of the things that we’re trying to impress upon the market is that we want our umbrella approach to youth participation to hit all kinds of kids. We have programs that reach rich kids, poor kids, kids of all ethnicities, and equally important, is providing participation opportunities for both males and females. It is a really important part of the effort.

(Editor’s Note: Information regarding the programs offered by RBI and Urban Youth Academy is available at www.mlb.com and the process for applying for grants from the Baseball Tomorrow Fund is set forth at www.mlbcommunity.org.)

Q: Are there any aspects of modern-day youth sports and high school sports that you find troubling or worrisome?

Manfred: In terms of youth sports generally, I would point to two things. One is the specialization aspect. I think it’s really interesting, you know John Smoltz during his acceptance speech at the Hall of Fame went out of his way to express the view that as much as he loves baseball, he thinks it’s really, really important for kids to play multiple sports, and I agree with that wholeheartedly. I think the focus on a single sport is a bad thing in terms of overuse, injury, and frankly just in terms of developing well-rounded individuals and well-rounded athletic skills. Playing multiple sports is a really good thing. The second thing about the youth participation market that scares me the most is declining numbers (of participants). Okay, there’s reasons for declining numbers, one of which is the specialization we just talked about, but the fastest growing area of youth participation (as indicated by surveys of young people regarding how they spend their time outside school) is “nothing.” Nothing is a synonym for ‘I fool around with my electronic devices instead of play a sport,’ and that’s a very, very serious issue in my view. It’s not just about athleticism and good health habits. I think in terms of the overall development of young people that sports, forget whether it’s baseball, football, basketball or soccer, sports in particular, team sports, they play a really important role in the development of young people, and I think kids turning away from sports and being focused on these devices is a very bad thing for our society over the long haul.

Q: John Thorn, MLB’s Official Historian, often speaks at conferences such as the Cooperstown Symposium on Baseball and American Culture and the Society for American Baseball Research (SABR) to promote greater interest among adults in baseball through exposure to the unique history and mystique of the game. Does he have any similar programs designed to increase interest among K-12 age youth?

Manfred: John actually is sort of at the center of that. John has his own website which is entirely focused on trying to convey the history of the game down to the next generation. Also, we have been involved in a variety of ways in trying to promote in particular the legacy of Jackie Robinson. MLB paid to have the film “42” played in schools as a vehicle for trying to remind young people about what the legacy of baseball is. Not just the game itself, but its significance in the history of the United States.

Q: You are the fifth lawyer to become commissioner (following Kenesaw Mountain Landis, Happy Chandler, Bowie Kuhn and Fay Vincent). Has your legal training provided any advantages in your leadership role as Commissioner?

Manfred: I think the great thing about law school and being trained as a lawyer is not necessarily practicing law. I think that it is great training for a lot of careers in and outside of business, but particularly in business, and has been a tremendous asset to me as my career has progressed in baseball.

Q: Is there any issue we haven’t touched on or any message you would like to communicate to high school administrators and athletics personnel regarding participation in education-based athletics in general and baseball in particular?

Manfred: I would just like to reiterate and emphasize that I believe that one of the most important things that happens during the secondary education years is that young people, men and women, have an opportunity to participate in team sports and understand and learn the values associated with that type of activity.

Q: Finally, so many great baseball movies have been filmed throughout the years. Do you have a favorite and why?