Illinois Wrestler Inspires Others in Comeback from Injury 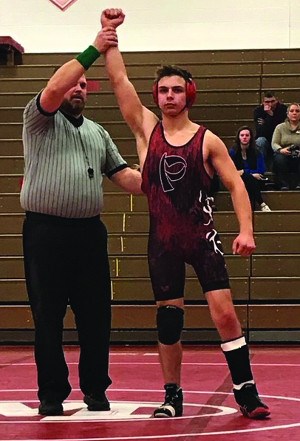 Leadership can be intentional or unintentional. While some people are natural leaders, others happen upon leadership through life experiences. Hunter Beasley is a high school wrestler who demonstrates leadership unintentionally every day through his actions after overcoming a debilitating spinal cord injury.

Beasley was a wrestling novice his freshman year at Pekin (Illinois) High School when he suffered a rare spinal stroke.

“I wasn’t the most athletic and I wasn’t in good shape, but that was not going to scare me away from going to practice every day and working hard. In fact, it did quite the opposite; it fueled me to get in better shape,” Beasley said.

The stroke Beasley suffered impacted his ability to use his legs, resulting in hours and hours of dedicated physical therapy. Most of his sophomore year of high school was consumed by hours of therapy.

“I still came to practice, but with therapy and a plethora of doctor’s appointments, it made it impossible to be there every day. I did not let that stop me from supporting my teammates,” Beasley said.

Beasley’s coach, John Jacobs, was a first-hand witness to both Beasley’s strength and determination and the impact he was having on his teammates.

“Hunter was a daily example to kids that were out on the mat,” Jacobs said. “He showed up each day and sat on the side. Any time a wrestler gave less than his best, I would remind them that Hunter would do just about anything to trade places at that moment. It changed their mindset.”

Though Beasley was dedicated to being there physically for his teammates, the mental toll of his injuries was a much harder battle to win.

“Sophomore year was a very difficult time for me. I was re-learning how to do everything. I was trying to figure myself out and my place in society. I was really kind of lost as a person,” Beasley said. “My world was flipped upside down and I was still recovering mentally. I honestly questioned what I was doing and if it was worth it to me to continue being on the team.”

Eventually, it was Beasley’s passion for wrestling that got him back on the mat.

“I love the sport and everything that it entails,” Beasley said. “My goal of someday getting back on the mat is what kept me coming to practices, even though I knew that I couldn’t participate. I knew that if I was sitting at home, I wasn’t going to get better.” 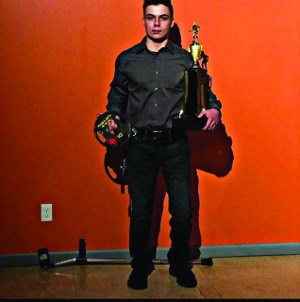 It was that same work ethic and determination that allowed Beasley to master his physical therapy exercises. Fewer medical appointments resulted in more independence and time to dedicate to his teammates on the mat.

Beasley’s junior year ended with a 100-percent attendance record and the Ironman award. “At the end of the season when I finally received the Ironman award, I was ecstatic. I had finally achieved one of my biggest goals since my very first day on the team,” Beasley said.

As a senior, Beasley set even higher goals for himself. He wanted to compete again. “When I finally got on the mat, it made all the hard work and pain worth it. I was told that I would probably not wrestle again – that is what made my decision for me. I knew that I would. I had my eyes set on it and wasn’t going to stop until I reached it,” Beasley said.

The sport had changed for Beasley due to his injury. It wasn’t as simple as getting physically strong enough to participate. He had to re-learn the techniques in ways that worked for his new body.

“Re-learning how to do specific moves and modifying moves to fit what I could do, that was the hardest part,” Beasley said. “I knew what to do, but I was lacking the muscle memory to do the moves. Lacking the feeling and movement of my left leg made it difficult or even made it impossible to do some things. When it got tough to do something on the mat, I would remind myself that I’ve come too far to let something this small stop me.”

Beasley is quick to recognize the role that Coach Jacobs played in his comeback.

“I honestly don’t think that I would have been so successful if I didn’t have such a dedicated and supportive coach,” Beasley said. “I look up to him and the fear of disappointing him is what pushed me to ignore my limitations and keep my leg from hindering my ability to complete the tasks that I was given.”

Jacobs is the first to see the leader Beasley has become.

“Personally, I was overwhelmed with pride seeing him defy the odds stacked against him, watching him work and refusing to feel sorry for himself,” Jacobs said. “I am most proud of his realization that he is a leader. What he has done and continues to do can inspire others, not by words, but by actions.”

The spinal stroke, the sport of wrestling and Coach Jacobs all played valuable roles in Beasley’s journey toward self-actualization.

“It has matured me greatly and shown me that I should never take what is given to me for granted. I have also learned the value of hard work and dedication,” Beasley said. “I see what happened to me as a gift and a curse. Sure, it isn’t a desirable condition, but what it has taught me is invaluable. It has changed me for the better and I wouldn’t have my life any other way.”

Lindsey Atkinson is director of sports/communications associate at the National Federation of State High School Associations.