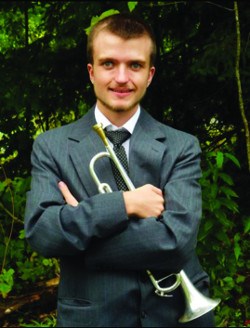 Music has been an important part of Nathanael Batson’s life for as long as anyone can remember. It started in first grade when he was a student at Kennebec (Maine) Montessori School, where part of the curriculum included all elementary students, starting in first grade, learning to play the tin whistle. Nathanael picked up that little flute and the rest was history. Music was a part of who he was.

About this same time, Nathanael had started to lose his vision due to a brain tumor. Initially, he could still read music, but because his vision was becoming so limited, his music was written out by hand so that each note could be enlarged and Nathanael could follow along. Soon, he was able to quickly memorize each musical phrase and before long, he was able to play entire songs from memory.

When Nathanael left the Montessori school he expressed an interest in continuing with music and wanted to learn to play the trumpet. He had watched the Indiana Jones movies and loved the sound of the trumpets in the opening score of those films.

So, a trumpet it was. Nathanael was a natural. He had a great teacher who worked with his family to figure out how he could best learn the music. At first, enlarging the notes and placing symbols next to the note as had done before worked fine. The symbols would represent rests, tempo and all the other things he would need to know to perform the music properly.

Unfortunately, his vision continued to deteriorate. Before long, Nathanael was unable to clearly see any type of print on paper. By spending time every day listening to the music over and over again and working with his band director and his trumpet teacher, Nathanael was able to again memorize his part so that he could perform with his school band.

Nathanael continued to improve with his playing through hard work and perseverance. At times, he wanted to quit, especially when his brain tumor treatment meant that he had to go through chemotherapy for the third and then fourth time. But this attitude did not last long and Nathanael would again feel that music was all the medicine he needed.

In middle school, he joined the marching band. The school music program continued to be supportive of his musical efforts and, despite the fact he is now almost completely blind, they worked with him so he could be full-fledged member of the program. He continued to memorize his music, even having a few solos in performance. To support his field movement, a guide to walk behind him during competitions was provided so he could perform safely with all the other kids.

Nathanael’s trumpet playing became well known in the area and he was asked to play with a local community band as well as in several events with the Boy Scouts. When Nathanael earned his Eagle Scout in 2015, his project, of course, included music. He recruited other players and organized a concert at the local Veterans’ Home on Flag Day. His passion for music reached out to the Veterans (and all others in attendance) and it was an incredible concert.

When Nathanael entered high school, his band director urged him to try out for the All-State Music Festival. Nathanael had already participated in the District Music Festivals representing his elementary and junior high schools. He knew that as a freshman, he was unlikely to be selected, but tried out nonetheless. Not only was he selected, but he scored in the upper half of all trumpet players, even as a freshman.

The All-State Music Festival almost did not happen for him that first year. A few weeks before the concert, Nathanael had problems with the shunt he has in his brain to help with his tumor. He was in intensive care three weeks before the concert and all involved were worried that he would not be able to perform. However, 10 days after he got out of the hospital, before he even had his stitches out, he was on stage playing his heart out. Once again, it was a wonderful concert.

Now a sophomore, Nathanael again was selected through audition into the All-State Music Festival. And he did so despite ongoing problems he has had with his shunt. However, he continues to work hard,
sharing the passion and love he has for music.

This summer, Nathanael is going to the National Boy Scouts Jamboree in West Virginia and will be part of the Jamboree Band. His love and passion for music burns brightly and he hopes to continue in music
after high school as a music therapist or possibly teach music. No one who knows him doubts that he will be successful in all that he attempts as he continues to improve and grow his musical skills.

Yvonne Batson lives with her husband, Chris, and son, Nathanael, in Fairfield, Maine. Her daughter, Corina, and her fiancé, Tyler, live in the area. The Batson family believes their faith helps them with any and all challenges they face.