While the concerns are numerous – specialization, overuse injuries, burnout – overall participation numbers in high school-based programs continue to rise. So, given the continuing rise in school-based athletics participants, what is the impact of non-school sports programs on interscholastic athletics, and why are many school and state administrators so concerned?

Jack Roberts, Michigan High School Athletic Association (MHSAA) executive director, said he believes the risk of injury due to overuse from excessive competition is one of the major concerns when student-athletes specialize in one sport and play year-round. Roberts believes that overuse injuries will be the next major point of discussion with regard to health and safety issues along with concussions, heat-related illness and sudden cardiac arrest.

The MHSAA has a policy that restricts student-athletes who are playing high school team sports from participating in competition with a non-school team in the same sport and season in which he or she is participating with the school team.

“I think that our rules protect you from excessive competition in the same sport and promote students first and athletes second,” Roberts said. “Our rules intent is to limit the number of competitions in a sport during a period of time, during our season, not just because it is the best way for our kids to have enough time for school work, but also we think it is healthier and safer.”

A survey of state associations indicated that 21 states, including Michigan, do not permit same sport/same season competition. Some of those states have exceptions for some individual sports, while others permit no exceptions. The survey revealed that 23 states allow same season/same sport competition, with some states noting exceptions in certain sports. 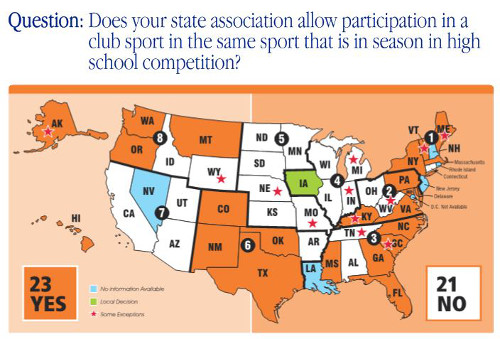 Roberts pointed out that some high-profile athletes have recently spoken out regarding concerns about the repetitive use of the same muscle groups as well as promoting the benefits of multi-sport participation. He indicated that during John Smoltz’s baseball hall of fame induction speech, the long-time pitcher cautioned against excessive throwing/pitching in youth baseball and highlighted the need for more multi-sport athletes. Roberts also stated that professional golfer Jordan Spieth and players from the U.S. Women’s Soccer World Cup Championship team have all recently been promoted as multi-sport athletes.

“There seems to be, finally, a strong current that is getting stronger against over-training and against overuse injuries in sports,” Roberts said. “In my career, people have talked about the dangers of specialization in a single sport, but it seemed that we were the only ones talking about it. Now it seems to be spoken about everywhere.”

“Our members themselves do believe in the idea of school loyalty, and to be part of a school team still means something.” Anderson said. “Along with the high-level philosophical reason, I think there might also a pragmatic reason as well. If you are not there for our big game against our long-standing rival, our chances aren’t as good.”

At Mahomet-Seymour (Illinois) High School, Matt Hensley, assistant principal of extracurricular activities, has developed incentives to encourage multiple-sport participation. Hensley, who has not seen an overall participation decline due to non-school sports, does note that there are fewer multi-sport athletes in his program. He is working to reverse the trend by actively promoting and rewarding those who are participating in multiple sports.

“The three best student-athletes that we’ve had go through the halls of our building in the decade since I have been here have all been three-sport athletes for four years,” Hensley said. “We promote those kids. Our tri-athlete award, we make a big deal about that. We give patches, we hang their pictures up and we give a four-year tri-athlete blanket to kids who go four years in three sports.

Hensley, like Roberts, believes that when public figures make positive statements or show support for interscholastic athletics, it must be promoted to the school, student-athletes, parents and the community.

As an example, a review of the 2014 Ohio State University National Football Championship roster and the players’ bios by the Deseret News in Salt Lake City, Utah, revealed that 52 of the players played more than one sport in high school with 17 of them playing three.

“I think we are getting some unexpected help now as I have heard some Division I college coaches in football and men’s basketball speaking about the value of multiple-sport participation and that they are committed to recruiting students who have that well-rounded experience,” Hensley said. “That is something we taught. When we see those things from people outside interscholastic athletics, we try to get those things out in front of our community.”

“I think that we are most successful when we talk about the brand of school sports being the one that is less expensive, and it is done in front of your peer group and friends,” Roberts said. “That is what we need to promote – the crowds, the fans, the environment of interscholastic sports.”

Jason Haddix is coordinator of sports at the NFHS after serving internships in the Publications / Communications Department. He is a 2013 graduate of Indiana University-Purdue University Indianapolis where he earned a bachelor’s degree in medical imaging and a certificate in journalism. He is currently pursuing a Master’s Degree in Athletic Administration from Ohio University.