When members of the 2011 athletic teams from Essex High School in Vermont reflect on their accomplishments, they likely will not dwell on their team records or personal statistics. Instead, what they will remember the most – and what they will carry with them for the rest of their lives – is what they accomplished off the field.

Likewise, students and administrators at South Royalton School will remember the summer of 2011 forever – first for the destruction of several schools caused by Tropical Storm Irene and second for the outpouring of support offered by the Essex High School athletic teams. 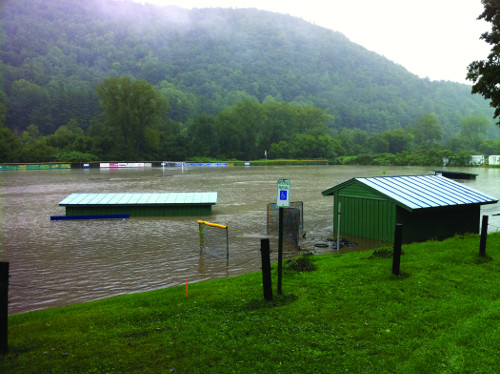 From one of the state’s worst natural disasters four years ago came a connection between two schools, and that connection, which continues today, was made possible by several caring individuals at Essex High School. While the damage caused by Irene is still evident throughout the state in the form of altered riverbeds, land no longer used for housing and roads still in need of repair, the only evidence of Irene’s wrath at South Royalton is in the form of three equipment sheds built by students from Essex High School.

South Royalton, a small K-12 school, was among the hardest hit by Irene. Its athletic fields were submerged in 2 feet of water, the baseball field dugouts were decimated, the scoreboard was flattened and its two outdoor athletic equipment storage sheds were wiped out by the onrushing waters.

Ed Hockenbury, Essex’s athletic director at that time, became aware of the destruction at South Royalton and made a decision to help the school. As he watched the news coverage that summer, Hockenbury determined his best available resources: his student-athletes and the regional technical center that is a part of Essex High – Center for Technology Essex (CTE).

Reaching out to his Athletic Leadership Council (made up of upper-class student-athletes in each sport), he immediately found them not only motivated to pitch in, but creative in the ways that they could do so. After a discussion with CTE’s director Bob Travers, the students were on board – specifically those involved in the Building Trades program.

Through donations of material and money, the Building Trades students from Essex High built three equipment sheds, loaded them on a flatbed truck, delivered them to South Royalton and installed them on the school campus. With an estimated cost of $25,000 each, the three sheds were provided to South Royalton free of charge, but that didn’t include any equipment. So the Athletic Leadership Council at Essex High raised money through various community service projects such as yard work, organizing blood drives and other fundraising activities to help fill those sheds with the gear that the South Royalton athletes needed.

“One of my vivid memories was when our small group of Essex kids – the student leaders of our Athletic Leadership Council – went down to tour SoRo (South Royalton), and we got a full police and fire department escort when we got off the interstate,” Hockenbury reflected recently on that special day four years ago. “The entire school was outside giving us a standing ovation when we arrived. I was fighting back tears that day! The genuine appreciation that was expressed to us was truly overwhelming. I think any Essex student who was involved in that entire project would tell you it was one of their best memories from high school.

“The Essex kids got to see the devastation and then witness how their efforts made a small, but very real difference in the lives of others. Then, to see how much and how sincerely their efforts were appreciated by the entire community; it was an experience neither I – nor any of the students – will ever forget. And I can say with certainty that all of the Essex kids who shared the experience learned something not only about appreciating what they have, but also about the value of helping others. Talk about life lessons in high school sports – it’s hard to top this one.”

“On our first trip to Essex, our Athletic Leadership Council attended one of Essex’s Leadership Council meetings,” said Jeff Moreno, activities director at South Royalton at that time. “We got to meet the tech folks who were building our new sheds and spend some time outside of our ‘reality’ back home. We drove home in a much better place that day.

“Later, we took three buses of students – along with countless community members who drove themselves – to an Essex football game. The Essex players had ‘SR’ stickers on their helmets and we had a chance to thank the community directly during a halftime ceremony. It was pretty powerful. A handful of Essex students came to SoRo that fall as well. They got a raucous welcome by the entire student body. We toured the school, the fields and portions of the town.

"The final time we got together was when Essex brought a large group down to SoRo for the check presentation. Our boys basketball team wore Essex uniforms, the Essex cheerleaders did an incredible performance at halftime, and there were several student speeches before the huge check was handed over. Those experiences – well beyond the check for more than $12,000 or the three storage sheds CTE built (and delivered) for us – were what defined the relationship between the schools. None of it would have happened if Hock (Ed Hockenbury) hadn’t had the trust and respect of his students and community. It was a powerful experience well documented in our local papers, in our yearbook that year, on plaques still hanging in the school and on the sheds, and on a large panel on our baseball scoreboard commemorating the generosity of the Essex community.”

And while Essex’s efforts to support South Royalton made a lasting impression on everyone involved while teaching several valuable life lessons, similar actions took place across the state. Randolph Union let nearby Whitcomb High use its athletic fields for all of its fall home games; Bellows Free Academy in Fairfax (with 200 in its high school) collected supplies and raised money for Woodstock Union High School, a school of 800 more than 120 miles away; Twinfield School joined Essex in raising monies for SoRo. Joining in were hundreds of individuals who offered funds, equipment and support. Volunteers from communities everywhere pitched in with time, labor and equipment to provide for our schools, our students and our state.

Four years removed from the destructive force of Tropical Storm Irene, the three equipment sheds, built by students for students, supported by one community to reach out to another community, remain as a reminder that with every challenge comes opportunity.

Steffen Parker, a member of the High School Today Publications Committee, is a music educator, computer geek and instructional support specialist from Vermont where he organizes music festivals and supports other states with online services for their events.