In 1971, the Houston Independent School District opened its first stand-alone magnet school. Although the famed LaGuardia High School in New York City had opened the previous year, The High School for the Performing and Visual Arts (HSPVA) in Houston would be the first school in the country to integrate both the performing and visual arts into its curriculum.

Ruth Denney, HSPVA’s founder, encouraged art and academic teachers to work together to cultivate connections between art and core curriculum content areas. Now beginning its 45th year of excellence in both the arts and academics, the tradition of creative collaboration is still an integral part of the campus culture at HSPVA.

With cross-curricular collaboration occurring between teachers at HSPVA, and students engaged and learning because educators are working together, it would seem that these partnerships could occur on any campus. If fine arts teachers across the nation take time to explore the educational opportunities available to them just down the hall in a colleague’s academic or arts classroom, student success would soar.

In an English II classroom, teacher Gabriela Diaz expanded her traditional literature scope and sequence into a world humanities curriculum.

“I challenge our artists to find the commonalities in the human artistic experience,” Diaz said. “With intellectual rigor, ethical reflection and emotional engagement, we can create empathetic citizens as well as stronger readers and writers.” 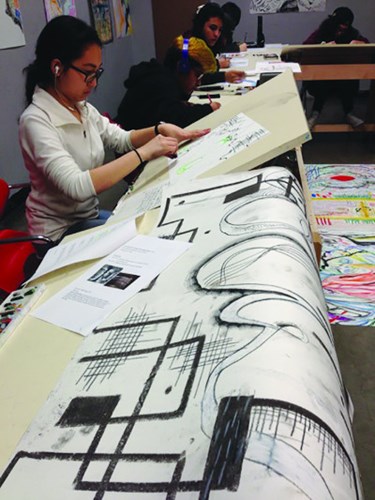 Diaz has collaborated with visual arts, theatre and, most recently, she worked alongside dance instructor Jennifer Mabus to create a lesson they titled Dance as a Weapon.

After a few movement activities, Mabus asked students to sit and to reflect on the energy they created with their movement. She turned off the lights and projected Strange Fruit, a dance choreographed by Pearl Primus in 1943. The dance accompanies the spoken word poem by Abel Meeropol, but it is best known for the evocative notes of Billie Holiday.

Students began to unwrap the piece to discover a brave message, a “war cry from the arts” about lynching in America. Through discussion and movement where students embraced dance, literature and historical events, deep learning occurred as emotional and relevant connections were made.

The school’s creative writing chair, Judith Switek, has reached out and worked with every art area. Recently, the writing students collaborated with jazz peers. Students met with different professionals from across Houston to interview them about life experiences. They then wrote short pieces, some creative non-fiction and some poetry that they read aloud with jazz students accompanying the works.

Students learned to develop an idea of the mood they wanted their written piece to convey. They had to communicate that idea to the jazz musicians so the written and musical pieces sounded cohesive. The writing students learned about being specific, open-minded and flexible as they explored the creative process with a fellow artist from another discipline and often discovered a product that was far better than the one originally imagined.

Eastman Landry, HSPVA physics teacher, explains how he finds integration of the arts into his physics instruction a natural collaboration.

Landry says that while each of his examples may be generic, topics in his curriculum can easily be related to the art that surrounds his students every day. He says the core message becomes “Physics is just another way to explore the world in much the same way art seeks to express that which is hard to explain.” At the end of the day, Landry’s students walk away with an appreciation which, just as one refines an artistic craft, one may also expand his or her capacity to describe the world through physics.

Visual arts instructor David Waddell had his students work with the orchestra students this spring. The class of freshmen studied Russian composer Petrovich Mussorgsky’s Pictures at an Exhibition,  a piece played by Orchestra Director Brad Smith’s symphony for the final concert of the year. Art students watched a slideshow on abstract art and then responded to the orchestra students’ performance of the music to create abstract work with watercolor, pastel, ink and chalk.

Later, the students each received a section of pictures that corresponded with another student in the class. Each pair brainstormed and conceived their own final collaborative piece as the final result. All 20 pieces were exhibited in corresponding order in the lobby of Rice’s Moores Opera House before the orchestra performance.

In each of these cases, teachers facilitate lessons and discussions where students are learning to express to one another how art relates to academics. They learn to listen to other students’ thoughts and ideas and to have rich discussion grounded in the arts. They gain real-world experience in learning to communicate by combining concepts of arts and academics through engaging activities.

Every teacher is an expert in his or her content area. Think of the magic that can happen when two or more teachers from different disciplines capitalize on that expertise and take the initiative to create a collaborative lesson. Such efforts can create something new, engaging and exciting for students, energize the classroom, and strengthen student success in both the arts and academics.

R. Scott Allen is a former classroom teacher, forensics coach and theatre teacher. He currently serves as principal of The High School for the Performing and Visual Arts in the Houston Independent School District. He has served as the president of the Texas Speech Communication Association (TSCA) and secretary of the Texas Educational Theatre Association (TETA).