Competing in high school sports is a great way for athletes to not only develop their fundamentals and skills, but also their love for the game. Oftentimes, that passion for the sport can be seen through the blood, sweat and tears they leave on the field. That’s the kind of passion that Steve Dunn and Becky Moran don’t want to go unnoticed.

Dunn and Moran shared their ideas about recognition programs at the 2015 National Athletic Directors Conference in Orlando, Florida.

After spending four years at Oliver Middle School as a teacher, administrator, and as football coach at Broken Arrow, Dunn was named assistant director of athletics in 2014. As he spent time with his students and athletes, and saw their desire to be great, Dunn felt as though there was a need for more recognition of those hard-working individuals.

“This is our window of opportunity on earth to make a difference in young people; an entire generation,” Dunn said. “There is no greater parallel to life than athletics. What it takes to be successful in one is the same as the other.”

Dunn oversees 1,368 student-athletes and 130 coaches, and created “The Seven Pillars” to explain to his athletes that with high exposure comes high expectations.

The Seven Pillars program uses the acronym approach for easy memorization and gives athletes and coaches a positive outlook on athletics as well as life.

“Our coaches are convinced that character wins, and by instilling the Seven Pillars of our Tiger S.T.R.I.P.E.S. in each of their student-athletes, their programs will reap great rewards,” Dunn said.

Tiger S.T.R.I.P.E.S:
• Service – work done for the betterment of school and community
• Trust – rely on one another by creating healthy, dependable relationships
• Respect – display good manners and compassion, and expect them in return
• Integrity – character is what you do when no one is looking
• Positive Attitude – be a role model of optimism in action
• Excellence – set high standards of excellence in both athletics and academics
• Self-Discipline – use restraint as a tool for self-improvement

Dunn created posters of The Seven Pillars and placed them around the school and his office, and posted them on the district website – but he didn’t stop there. Dunn has taken steps to create a development committee to have a group of people whose focus was on the growth of recognition programs. He has also used social media platforms to publicly celebrate student-athletes. 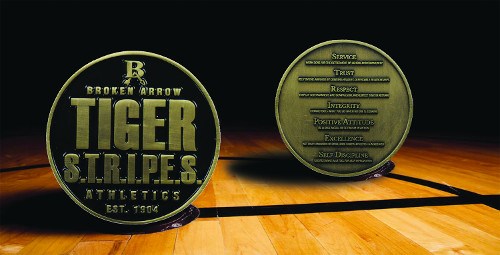 “You are never wrong for doing right,” Dunn said. “We started with an acronym and a graphic and have continued to evolve the program every year. If not us, then who? Athletics is the greatest platform in our country to captivate an audience, and one by one we can change our communities by raising a generation of high character young people.”

Although this acronym approach is implemented in the lives of his student-athletes, Dunn believes in coaching staff recognition just as much. By recognizing the staff, a buy-in is created, which makes it more personal, and the concept becomes integrated into their lives.

Dunn believes the idea of Tiger S.T.R.I.P.E.S has created an organization driven by students and has helped them obtain excellence throughout their high school careers – a reason why Moran is trying to implement this idea at her school.

“What you recognize will get repeated,” Moran said. “So if you’re recognizing academics or athletics, kids will want to be the ones that are being recognized, so they’re going to do those things in order to be one of those kids. At some point I want to implement something like that because I think what Steve is doing is a great program.”

Moran is trying to implement a similar program in her high school to acknowledge those who have made a difference – either on or off the field. She plans on taking an inventory and creating a philosophy in order to plan and educate students, coaches and administrators on how to create a successful recognition program.

“People want to know that what they’re doing is valued by somebody or something, and so I think that’s probably one of the biggest reasons as to why I want to do this,” Moran said.

Moran sees potential growth in individual athletes as well as the team as a whole. She believes if an individual on the team is recognized for his or her accomplishments and teammates see that kind of recognition, they’re going to follow in that individual’s footsteps in order to feel appreciated.

“Whatever it is that you’re trying to promote within your school as to recognizing someone, whether it’s a student, a staff member, a parent, a community member, for whatever that might be, more people will want to do whatever it is you’re looking for because they want to emulate that and they want to be recognized for the things they’re doing as well,” Moran said.

Recognition – to Moran – can range from a simple pat on the back to a full-blown banquet, but it’s something that has to occur more than once a year.

“There are ways to implement recognition in your programs without adding cost or a lot of time to what you’re doing,” Moran said. “It can be as small or as grand as you want it to be. It does not have to be monumental to undertake. But, you need to do those things because when you do those kinds of things people get excited and anytime you create excitement, they’re going to work harder.”

Whether it is for academics, athletics, coaching or teaching, both Dunn and Moran see the benefits of recognizing those who uphold the standards set by the school because what one recognizes could easily be duplicated by those who are watching.

Maddie Koss, a 2016 summer intern in the NFHS Publications/Communications Department, is a senior sports media major at Butler University.